How to organize kids toys is a topic that sounds basic. Buy some storage stuff and fill it up. You find yourself turning into a broken record of,

“Put your toys away when you’re done!”

Kids aren’t leaving a messy trail because they’re lazy slobs at heart. Nope. It’s something else.

Their stuff has nowhere to go.

I know, I know! You worked hard to organize your home. You outfitted play areas with toy boxes, organizing cubes, containers, and more. Closets, attics, and garages hold less-used toys.

All you’re asking is that they throw it in a bin, line it up against the wall, or jam it in a closet when they’re done playing.

Children need structure. Kids don’t know how to organize toys, which means you need “a place for everything and everything in its place.”

Which is a problem, because kids have so many toys it’s impossible to designate a spot for each one.

Kids need to learn to cope.  But they can’t learn how to organize kids toys if there’s no real organizational strategy.

I had it all planned out BC (Before Kids).

The coffee table had three large baskets underneath it. Bam! Built-in toy storage.

How to organize kids toys? Pshaw. I got this.

Epic fail. Even with sparingly filled baskets, toys were never put away. My daughter was used to putting her things away at preschool… why couldn’t she clean up at home?

The containers! My child had trouble organizing her toys because she had trouble retrieving toys from the high-sided baskets.

I wasn’t organizing toys… I was hiding them. 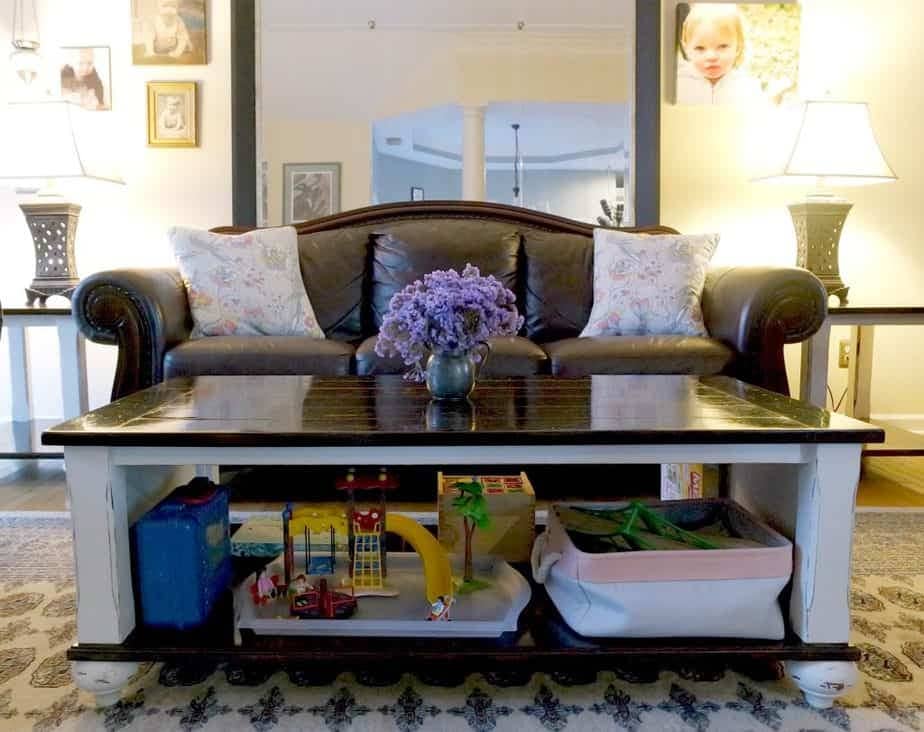 Out went the baskets. Now 5-7 toys take up residence under our coffee table. Not the prettiest site, but I prefer a few toys out over shoving them in a bin she can’t see or against a wall. There’s a small art table off to the side with a wall organizer that contains a small, rotating collection of art supplies.

One large play item stays out at a time (kitchen, dollhouse, playhouse, tent) and we rotate upon request or when something’s gone unused for too long.

A cabinet or storage boxes like these are filled with remaining toys. We organize toys by assigning each a designated spot. My daughter completes a toy exchange by switching out a “new” toy with a played-out “coffee table toy” when she’s ready to play with something different.

What If Your Child Forgets?

If she’s not playing with the current selection, I’ll take the lead and complete a toy rotation based on what I see her using or talking about. Older kids can do it themselves. You can get kids to organize toys.

You just have to put most of the toys away to give them a chance to succeed.

Every time your child has to throw unrelated toys together it undermines their ability to clean up.

Teach kids to appreciate their belongings by giving every item a home. Whether you have a 7-bedroom home or studio apartment, kids need to work with the space they have and so do we. 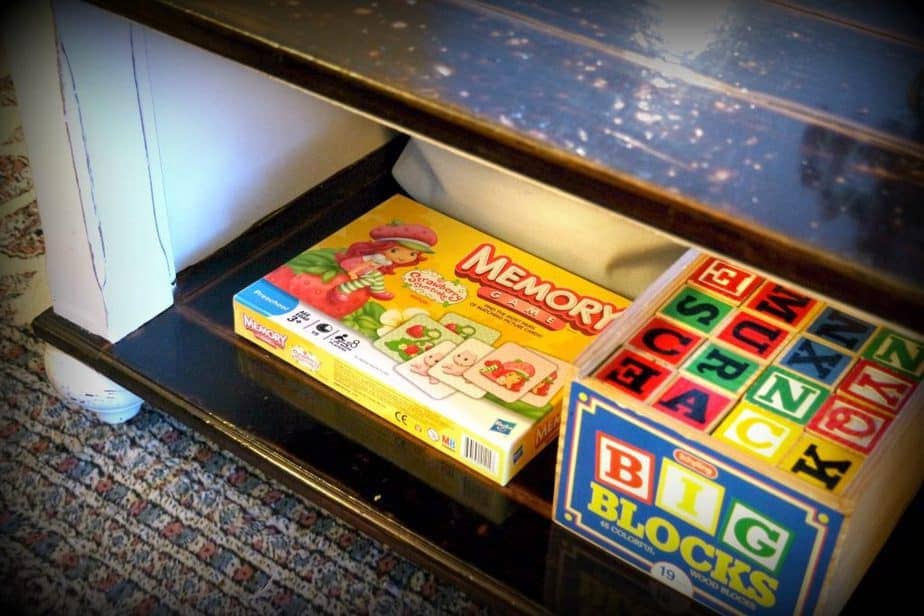 [thrive_headline_focus title=”Exceptions to the Rule” orientation=”left”]

Some toys that benefit from a “dump it in” mentality:

I’ve found we don’t need every piece every time.

Example: My daughter recently received a 75-piece magnetic princess play set. Score! She loves it, but 75 pieces for a 3-year-old? Wayyyyy too much. I leave out 25 pieces and rotate them. Less mess, more play.

[thrive_headline_focus title=”As For Everything Else” orientation=”left”]

There’s no easy way to say this so I’m just going to rip the Band-Aid® off.

Keep your child’s favorite toys. Don’t learn how to organize kids toys they don’t even like. Get rid of the rest.

I get that you don’t want to throw it all away.

Really, I get it.

But you work hard and care for your home. It’s not your job to deal with a houseful of guilt and mess.

It’ll be tough to weed out and organize toys. My advice is to involve the kids when you can.

Tips For How To Organize Kids Toys (Older Kids):

Younger kids are a bit easier. I cleaned out everything I didn’t want to interact with or read (yes, you read that right!), then watched my daughter for a bit. I noticed what toys she never reached for and got rid of them. A few I put away, knowing she was too young for them. That’s how we organize toys. 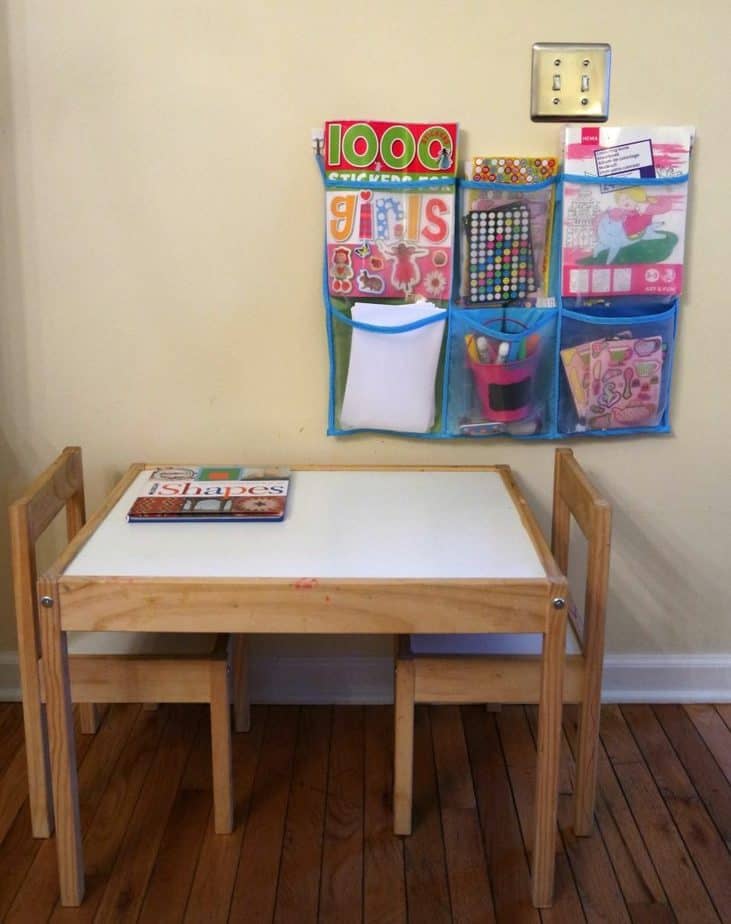 The rest went to friends and donation. Even gifts.

Touchy subject, right? Truly, I feel your pain. But gifts are not obligations. They’re considerations. And if someone’s laying a guilt trip on you because you donated a gift that’s no longer used? Shame on them. They’re the ones with the problem – not you.

Grandparents are often offended. It’s understandable. Explain you just can’t handle the amount of stuff. That there is so much stuff your child can’t even play with all of it.

Ask them how much they had growing up?! This much?? Stress that you appreciate their gifts and your child has kept their favorites.

Many families find creating an online wishlist (Amazon.com is a great place to store the list) helps. I don’t, but I do make a point of telling gift-buyers what my daughter really wants. Rude? Maybe. But I don’t expect gifts. If they want to give my daughter something, I’m happy to point them in a direction she’ll enjoy. If they want to brainstorm on their own, awesome! Everyone understands we won’t keep it if it’s not a hit.

Decreasing toy quantity decreases stress and increases attention span and care. It’s not some crazy parenting technique. It’s science. Too many choices make us less able to choose. Decision Fatigue is a real and growing problem.

There’s no big trick. How to organize kids toys is about eliminating everything that doesn’t get used often, is broken, or is missing pieces, and keeping out a small rotation of loved toys. 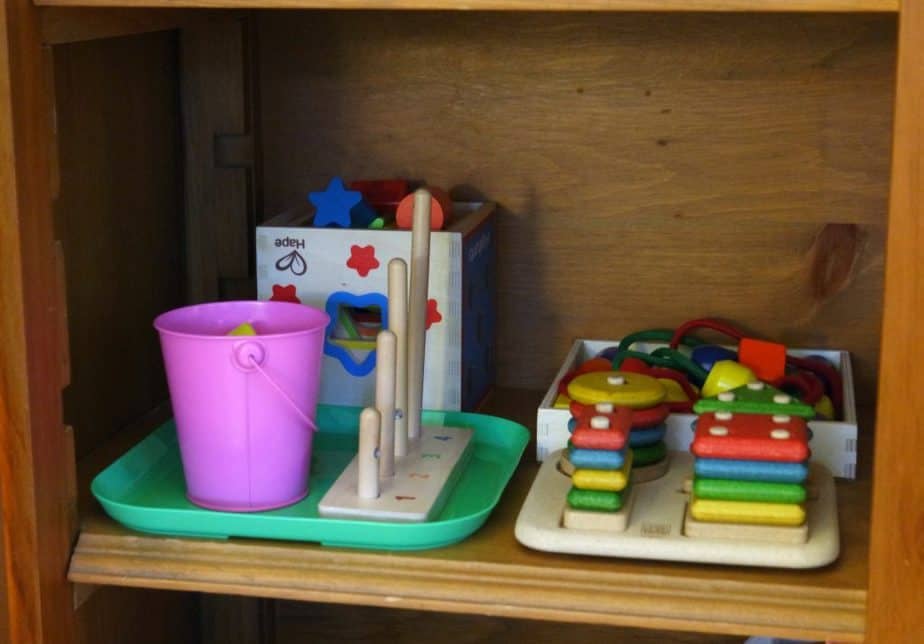 Drastically reducing the number of toys will result in a more engaged and careful child, who appreciates their belongings (most of the time).

Not to mention it makes holiday and birthday times MASSIVE hits! 😉

I can tell we have too many toys – especially after birthdays and holidays – when toys start piling up and getting shoved on top of each other. We know it’s time to weed out the old and make room for the new.

Remeber, a place for everything and everything in its place. That’s how to organize kids toys.

That’s how to get kids to clean up.

Take a day and go for it. We figured out how to organize kids toys and it works!

Best of the Blog, Education, Parenting (By Age)

How to Teach Respect to Kids In Any Life Situation

[thrive_headline_focus title=”It’s tough to teach respect.” orientation=”left”] Especially when you’re battling for your life.  I’m talking about the dreaded D-word. Divorce. After my wife and I started divorce proceedings, my son was a wreck. We tried to save our marriage, but no amount of talking it out or counseling provided a solution. My son and END_OF_DOCUMENT_TOKEN_TO_BE_REPLACED

Best of the Blog, Mind & Body Health, Parenting (By Age)

Frustration ToleranceThis post was last updated on January 7, 2023Building frustration tolerance in children is a great way to help them develop emotionally – and save your sanity at the same time. Have you ever watched your child struggle to put on a pair of shoes?Try to shove puzzle pieces into the wrong spots?Pack a END_OF_DOCUMENT_TOKEN_TO_BE_REPLACED

[thrive_headline_focus title=”Okay, you think, these guys are little.” orientation=”left”]​I can do this. You’re about to enter the three-year-old daycare room. With a deep breath, you open the door that’s decorated with construction paper lily pads and cartoon frogs.Every eye in the place is instantly glued to your face.“Mommmyyy!” a little girl shouts, then realizes her END_OF_DOCUMENT_TOKEN_TO_BE_REPLACED